This post explores how meaning is negotiated and created. To do so, it examines a meme and includes at least one alternative interpretation. It also reflects on the cognitive bias that can affect how we generate and disseminate meaning in our own social networks. 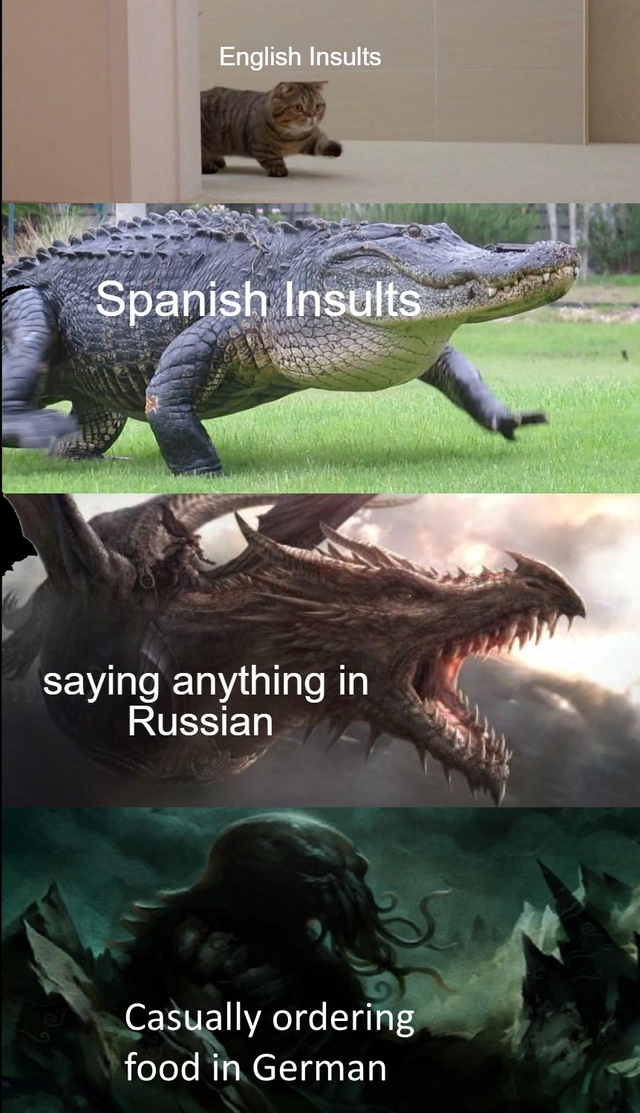 In this meme, you will find different pictures that describe how people see the given languages in the meme, which we relate to.

We chose this meme because we believe it’s closely related to our field of expertise- linguistics. English is portrayed as a cute kitten regarding insults because everyone is used to the English language being loveable and melodious; whereas Spanish sounds dramatic and intense. Furthermore, Russian and German are seen as rough languages, everything said in these languages sounds like an insult and they are also hard to learn.

The context of the meme is how languages are generally perceived by non-native speakers and that’s represented in a comic way using animals and creatures as prompts.

How can its symbolic content be interpreted in a different way, through a different lens?
Its symbolic content can be interpreted by using cartoon characters, superheroes, and villains. This meme can also contain usual words, rather than insults, such as the word butterfly, which in German sounds aggressive. Also, this same could be understood differently. One might see this meme as a prejudice that is often present when it comes to languages or conclude that it was made by someone who is English, so it can be the case of ethnocentrism or even egocentrism.

What is the message?
The message is that the last two mentioned languages are perceived by non-native speakers as rough and borderline scary. On the other hand, English is pictured as a cute animal, meaning everyone is used to its insults because English is generally seen as one of the soft languages, whereas Spanish is something in the middle.

Social media being one of the most used information sources today tends to usually misinform people due to different algorithms and bots that are intentionally put on the internet to achieve that goal. We believe that all of us, at some point, have been victims of false information found on the internet, and some of us have learned our lesson, but that is not the case for the majority of people, due to the increase of misinformation spread online.

Cognitive bias being one of the first mentioned in the article originates in the brain and it helps process the information people receive on a daily basis. The brain is only able to process a certain amount of information, but it cannot differentiate which information is reliable. In order to avoid overwhelming, the brain uses a number of tricks, which have often proven to be effective. Largely, information that we find on the internet is not of essential value and not that important, but before we get the chance to find out the truthfulness of it, we tend to spread it further. So, by the time we get to the truth, the false news have already been spread.

When it comes to social biases and biases in the machine, social media uses bots and different algorithms based on our clicks and searches to promote headlines, people, and content in general. We think that people should be careful when ‘’clicking’’ on headlines, and should always pay attention to the source of the article in question.

Falsey, Hoaxy, and Botometer are some of the apps mentioned in the article that were used to detect bots and false information spread on social media. They were proven to be useful during the 2016 election in the US. We could see that a great amount of attention has been devoted to this year’s election when it came to the spread of misinformation.

In conclusion, people should be aware of the fact that there is fake information on the internet, that internet cannot always be trusted. Online vulnerability took its toll in recent years, therefore people should always be cautious of who is the source of the information.