We must FIGHT for what is RIGHT!

This post explores how meaning is negotiated and created. To do so, it examines a meme and includes at least one alternative interpretation. It also reflects on the cognitive bias that can affect how we generate and disseminate meaning in our own social networks. 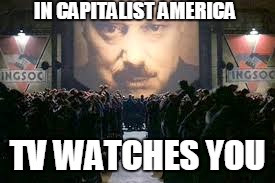 The meme we have chosen relates to George Orwell’s famous novel ‘1984’, however, the principles and values discussed in it still hold true to this day. We would like to discuss the topic of surveillance capitalism and how it relates to this meme in both a terrifying and humorous way.

What is the message?

As we’ve already discussed in some of our posts, posts and reflections surveillance capitalism exists to dictate people’s behaviour and which actions to take in life when regarding their personal interests. The meme that we have chosen relates to politics and economy and it goes like this: “In capitalist America, TV watches you”. The very idea of this is what should be considered bizarre and abnormal, but unfortunately it has become a substantial part of our reality. The underlying message within this meme is far more sinister than we could have even imagined. For the purpose of collecting data about people’s personal lives, preferences, interests etc. today’s capitalistic world is closely monitoring us through our devices and all of that under the pretence of “keeping an eye on us for our own good”. This meme expresses the growing problem in today’s world – that people have exchanged freedom of privacy for the sake of convenience and what’s worse is that we are willingly exposing ourselves online by posting pictures of ourselves and revealing valuable personal information for the whole world to see.

What signs/symbols does it use to get the message across?

The symbol that is presented by the meme is literally that of a face watching right back at a crowd of people that represent all the people who are willingly being subjected to this political and economic scam.

How can its symbolic content be interpreted in a different way, through a different lens?

Of course, it is not possible to “observe” every person at all times, therefore, we also have to see the world through a different lens. It can also be seen as the people watching the “people in the TV” if we remove the text.Despite the fact that we are being constantly watched, we must not forget that we are the ones who watch them as well. We, as the people, are greater in number and can easily subdue this whole capitalist surveillance movement. What is more, it is also a possibility that people may just be paranoid, since there is no guarantee the possibility of having a secret FBI agent assigned to each and every one of us. It is simply physically impossible to keep track of all of us, after all. 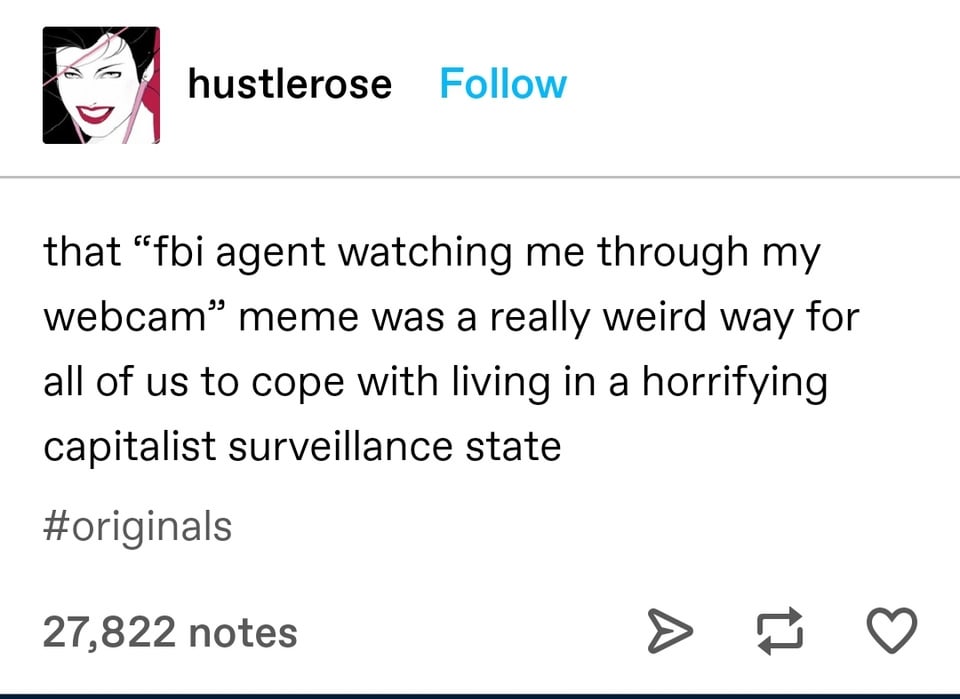 To sum up, we’d like to say that people should be careful about who they trust and what they post on the internet, they should be aware of being monitored and stand up against it rather than endorse it, but they shouldn’t become paranoid and threaten their own mental health by being so.

We are all aware that there are some advantages and disadvantages to being monitored, and despite the fact that the cons outweigh the pros, we must not completely repudiate the pros which are mentioned in this reflection . So, what should we do about this situation?

We must fight back!

There is no need for a bloodbath, no need for another French Revolution, the only thing that we need to do is to stop oversharing. People need to realise that by using platforms such as Instagram, Facebook, Amazon, Apple etc. they willingly bereft themselves of their own right to privacy. As Mr Hurst noted in his article Not so candid camera , ’They are constantly moving towards a deeper and more complicated entanglement with everything in our lives. They are building the default right now so that anyone who wants to get off is going to be inconvenienced’ (Hurst, M. 2020).

What he meant is that, basically, by postponing the fight for our privacy, we are getting more entangled with the products these tech giants are offering and that, sooner or later, we will not be able to escape them. This is why Hurst encourages people to step out of their comfort zone, to delete all social media and to prove that the lives of the people must not be dictated by some sort of a Big Brother persona who is constantly watching and thinks it knows what’s best for everyone.

What we found interesting is the fact that this is a unified battle, a fight for our survival, and in spite of that, we haven’t seen many, or any, politicians, i.e. powerful people who took a stance and said ‘Yes, surveillance capitalism is bad and needs to be stopped.’. The reason is probably because most of them are in on it too and make profit off of it, but of course, not everything has gone to the dogs. According to Hurst, some politicians, to quote ‘…Josh Hawley, a conservative from Missouri agrees with Elizabeth Warren from Massachusetts that something needs to be done about Facebook, Google, Amazon, and Apple’ (Hurst, M. 2020). Moreover, the fact that certain politicians are becoming conscious of this growing issue instills hope for a better tomorrow, a capitalist surveillance-ridden world.

We need to disseminate our knowledge on the matter and the more people, especially youth, we educate on the dangers lurking behind the colourfully designed applications the harder it will be for companies such as Google to keep track of and organise our lives. All of us are aware of the my-FBI-agent memes that have become a fad, but is this coping mechanism a good way of resolving the problem? We disagree. Instead of sitting in the comfort of one’s home and making memes about serious issues, people ought to stand up and fight for themselves and their freedom. Because if they don’t, we are just one step away from living in George Orwell’s ‘1984’.