Ironic Memes and The Nature of Truth 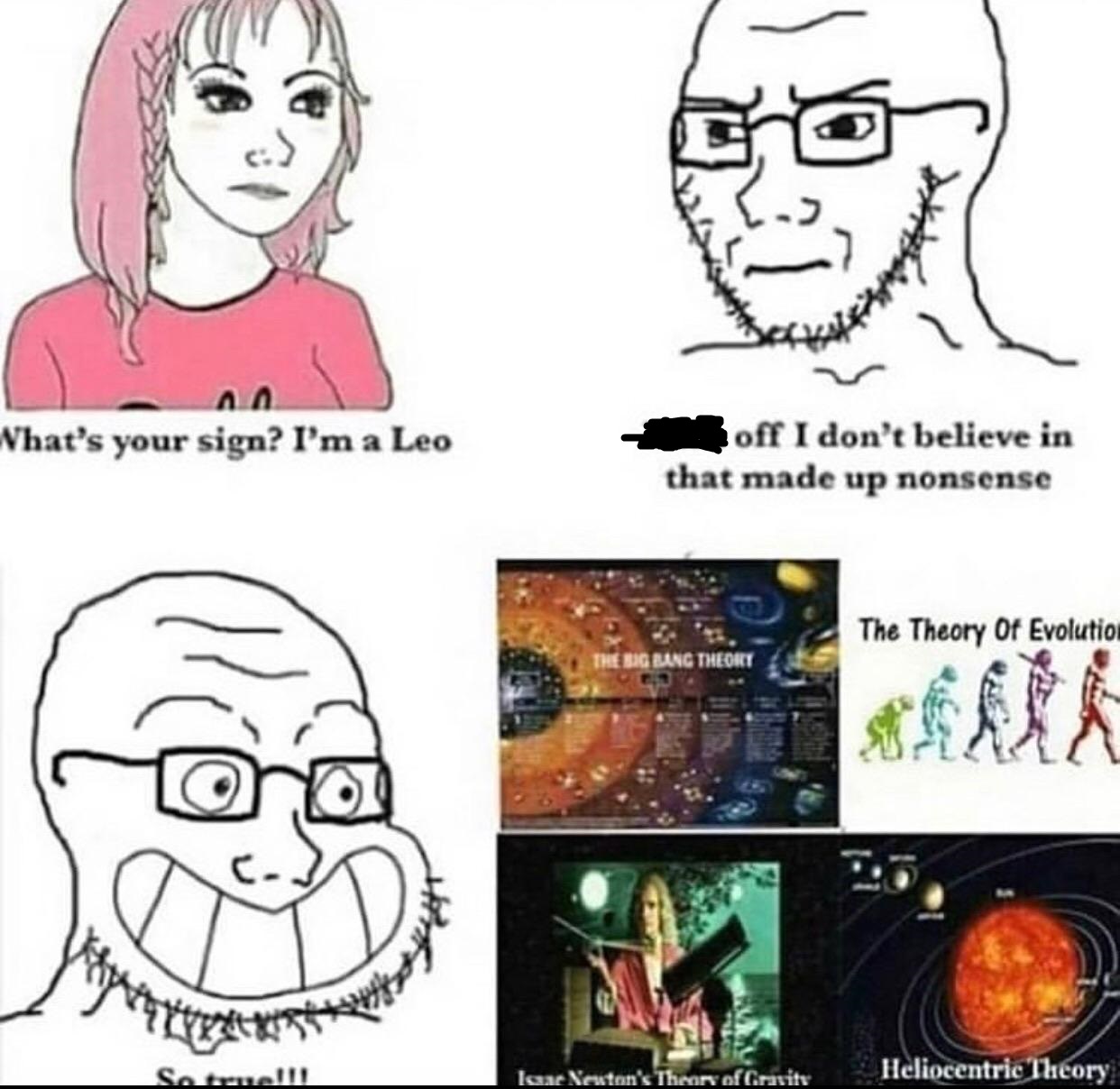 This meme contains a swear word, which is why I will not be directly linking to it. Although swearing is perfectly normal and is instrumental in creating meaning, I will upload a “bleeped” version of the meme for the sake of maintaining academic standards.

Fundamentally, in addition to being funny, we can see this meme as an epistemological inquiry into the nature of knowledge. Belonging to a series of Wojak comics titled I don’t believe in that made-up nonsense/So true, it compares various pseudo-sciences and sciences to astrology, implying that they are similar in their veracity. It communicates this meaning by employing a Soyak that adopts a stern stance towards Astrology, which he perceives as a pseudo-science, only to change it into a stance of boyish excitement towards what he perceives as “the truth”. The first such comic likened Myers-Briggs Type Indicator (a popular pseudoscientific personality test) to Astrology. In that case, it was clear that Soyjak was being ridiculed for rejecting Astrology on the grounds of its non-scientific nature, while himself holding similarly unscientific beliefs.

But, this specific meme adds a layer of irony. Here, Soyjak does not reject Astrology for the sake of a similar para science or pseudoscience. Instead, he opts for various scientific theories, such as The Theory of Evolution, Newton’s Theory of Gravity, and The Big Bang Theory. In the context of the meme, this would imply that the Scientific method is equally valid as the method employed by Astrology.

At a first glance, the meaning of the meme is fairly transparent. The ironic comparison of scientific theories to Astrology takes aback the reader, and the apparent absurdity of such comparison serves as a comedic device. This view would correspond to (very broadly speaking) Modernism’s Naturalistic perspective, with its overconfidence in the scientific method as the be-all and end-all of any type of knowledge, and its naïve belief in the narrative of progress. It rejects what it perceives as the pre-modern obsession with Mythos, only to accept a similar obsession with Logos, failing to realize that the latter grew out of the former. Such a worldview could only see that one layer of irony and the ensuing comedic effect of comparing “legitimate knowledge” to some hocus-pocus.

However, I would argue that another layer of irony is present. Just as Modernism rejects pre-modern notions, Postmodernism rejects the notions of Modernism. Therefore, the postmodernist viewpoint treats Soyjak’s view of science as an absolute and objective truth with irony and cynicism. It is so because of postmodernism’s general disdain for grand narratives and its relativist epistemological turn; for while modernists had an anthropologically optimistic outlook on human progress fueled by rational science, postmodernists saw the destruction of WW2 that it enabled. Thus, looking through the postmodernist lens, the whole subject is treated with two layers of irony. The first layer insincerely compares science to astrology, and the other obscures the certainty of that insincerity, leaving the reader puzzled if that comparison is meant to be genuine or not.

The concept from the reading list that managed to draw my attention was the concept of Declinism – a type of cognitive bias and a belief that a society or an institution is in decline. This notion is becoming more and more popular in regards to America, and it is a view held by people from across the political spectrum. However, I would say that this belief is exaggerated, and furthermore, that because so many people have such a pessimistic view actually means that things are going to be fine.

First, this belief is exaggerated due to a related cognitive bias – rosy retrospection. People always tend to view the past more favorably than the present, and this is projected as nostalgia (In America, the 80s are currently in vogue again, evident by shows set in the decade, such as Stranger Things). By comparing the present to the idealized version of the past, people think that it is implied that the perceived downward trajectory is going to continue, which doesn’t have to be the case.

And second, people in America have such strict standards due to the cultural element of Protestantism. As Alan W. Dowd explains, American declinism “is an expression of the American tendency toward self-criticism and continual improvement.” Therefore, the very fact that negative tendencies in American society are being constantly criticized increases the chance of improvement.